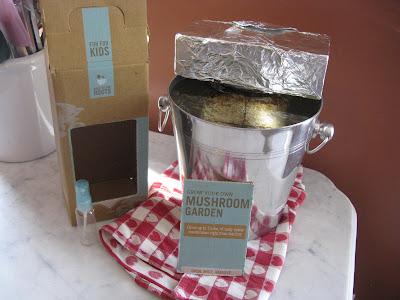 A few weeks ago, D bought us a mushroom growing kit at Whole Foods. There are lots of different versions of mushroom growing kits out there, this one is for oyster mushrooms, and is made by a company called Back to the Roots. These kits are made with used coffee grounds and their mission is focused on sustainability and according to their website were "inspired by the idea of turning waste into wages and fresh, local food."
The first step is to soak the brick of coffee grounds for 24 hours, and then you put it back in its cardboard box, with a panel removed for the mushrooms to grow from. 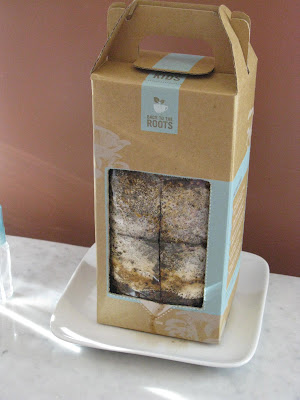 We kept ours on the kitchen counter, out of direct sunlight, for about a week and saw no action. Then, I put it in my dark closet and the next day mushrooms were sprouting. Once they were in the dark, they were happy. The only thing they need is some water spritzing each day. 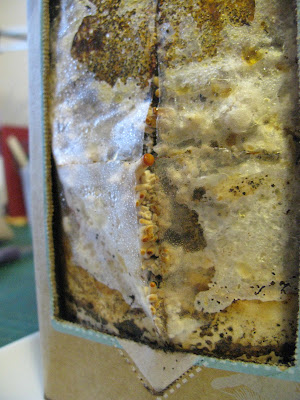 Once they started growing they looked pretty alien, and grew significantly each day. Within about a week of them poking through, they were ready to harvest. 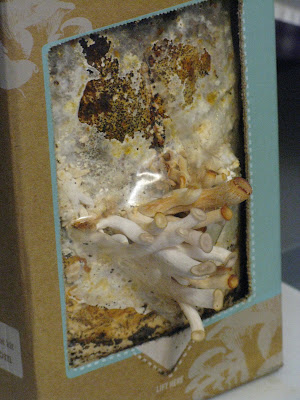 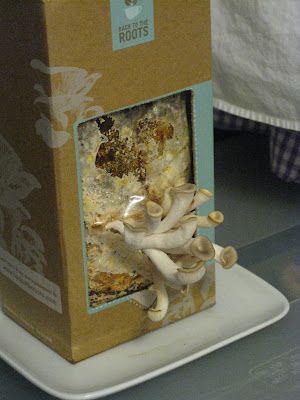 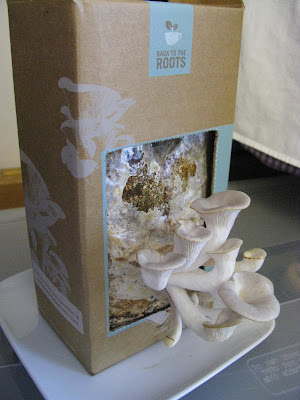 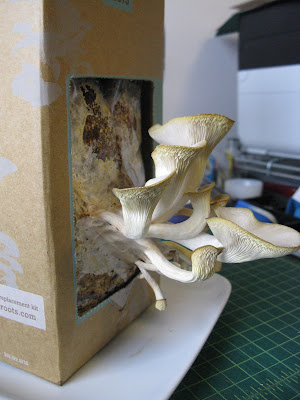 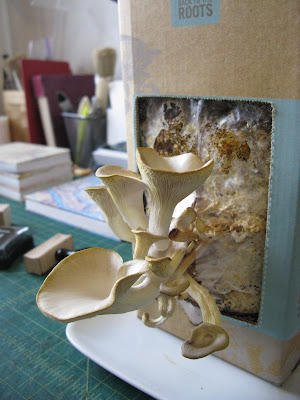 We actually should have harvested a little earlier. We were hoping for more, so left them on a little too long. When we finally cut them off, they seemed a little dry, and we were worried we had missed the window and they wouldn't be good eating.
Thankfully, D is skilled in the ways, and he let them dry, and then when he was ready to use them, he rehydrated them and put them in his mushroom risotto. 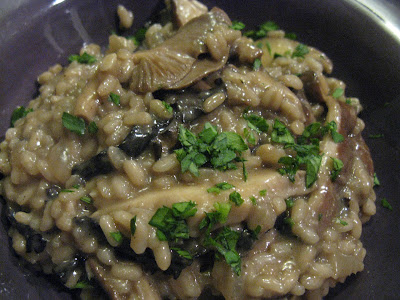 D uses a mixture of mushrooms in his risotto, and it often varies depending on what types of mushrooms he sees at the store. The mushrooms we grew were oyster mushrooms. We thought this was a perfect dish to try them in since it's one of our favorites, and if they didn't taste good we could easily just pick them out. We were also a little worried the texture might be too chewy since we had let them dry, and then rehydrated them. We had nothing to worry about, they were delicious. The texture was perfect, not chewy at all, and the flavor was unique. They tasted a bit brighter and fruity, not quite as earthy as we expected. They added a unique brightness to our risotto. 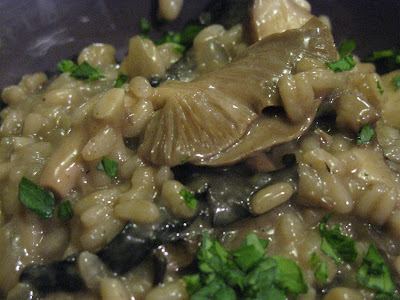 This definitely proved to be a fun project, that takes up very little space. The yield was a little smaller than we expected, and it would have been hard to do a meal for two (or even one) if you were depending on the mushrooms to be the star of the meal, but it worked out well for our risotto. Also, the kit supposedly will yield mushrooms around 4 times. We flipped the brick around and are currently growing batch two from the other side of it.
Posted by Kristin at 8:29 AM