This is the time of year I supposedly have down time. In the midst of craziness, I often think that in February I'll be creative. Easier said than done. It's often hard to turn on the creativity on the day I have it scheduled. In an effort to get the juices flowing, I've been putting on some small warps to weave quick samples. I've had mixed success with this, as I realized that I keep weaving upholstery. After 10 years designing for the home furnishings market, I guess old habits are hard to break.

To get upholstery out of my head, I pulled out a bunch of books to pour over and let myself spend some time just looking through, drinking tea, and sketching some ideas. It's hard to break myself from production mode where I'm just cranking things out, so I'm forcing myself to take my time. Here are a few of my favorite textile design books that I feel like sharing.

Lenore Tawney, Signs on the Wind. A groundbreaking textile artist in her time, Lenore Tawney lived to be 100 years old. This book is a collection of postcard collages that she would send people. She did this throughout her life and sent them all over the world. 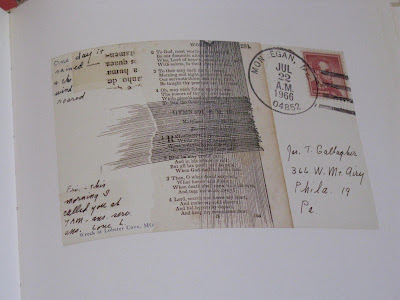 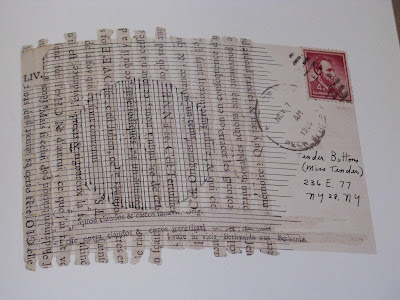 All my Anni Albers' books I would save in a fire. I have two that she wrote, and then one from an exhibit at the Jewish Museum I went to years ago, and another from a Cooper Hewitt exhibit of the work of her and her husband, Josef Albers. Since I've been away from weaving for awhile, I'm particularly drawn to her texture and pattern studies. 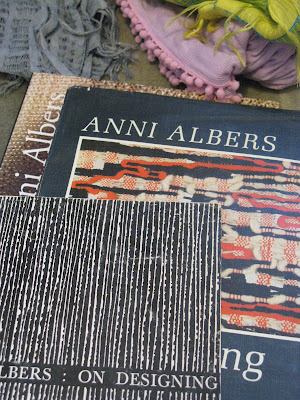 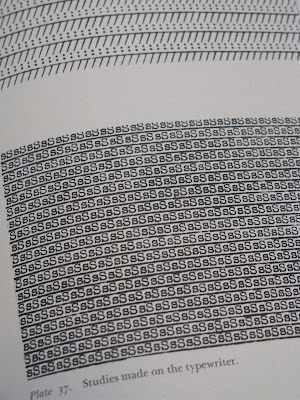 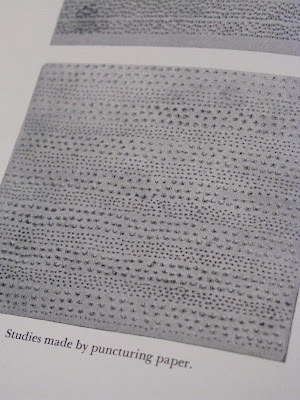 The museum catalog from the Serizawa, Master of Japanese Textile Design exhibit that I saw back in Edinburgh in 2001. I love this book for just being a gorgeous book, the paper feels incredible, and the design is just perfect. I blogged about this book, and Serizawa here. 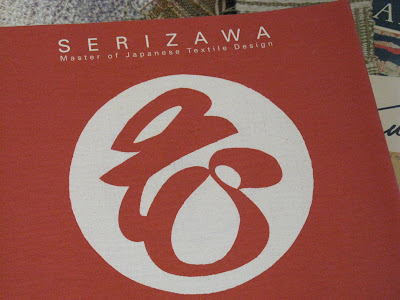 A Handbook of Weaves by G.H. Oelsner. A reference book that no weaver is without. 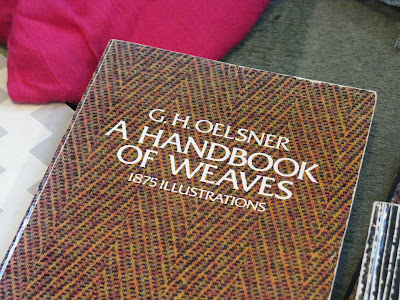 Posted by Kristin at 3:30 PM No comments: 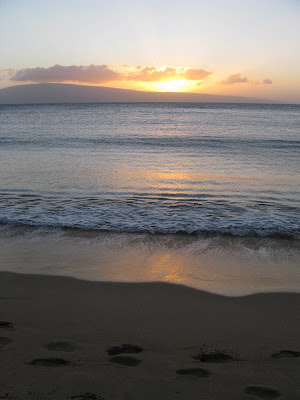 Aloha is enough of a reason to go to Hawaii, but there are a lot of other things we love about Hawaii and Hawaiian culture. Not surprisingly, one of those things is the rich and varied food culture. Many different cultures came to Hawaii for a variety of reasons such as whaling, working on plantations, and as missionaries. Each brought their food, and as a result, Hawaiian cuisine is very unique, and crazy delicious. 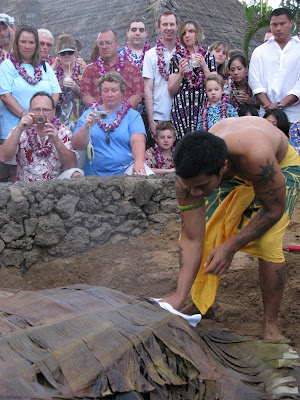 My personal fave is kalua pig. Now, this is something (for which I am eternally grateful) that D can make at home, but there's really nothing like having it at a luau, where you see the pig come straight out of the imu. I was almost embarrassed at the luau at just how excited I was. I was ringside for the imu ceremony, and was so excited waiting for our food, that I actually felt the need to explain to the nice couple sitting across from us, "I really love this dish. Really." Below is my plate at the luau, with a huge portion of pork, but also a good selection of tastes of the other delicacies, including the Hawaiian staple: poi, made from the taro root (purple stuff), ahi poke, purple sweet potatoes and some veggies. 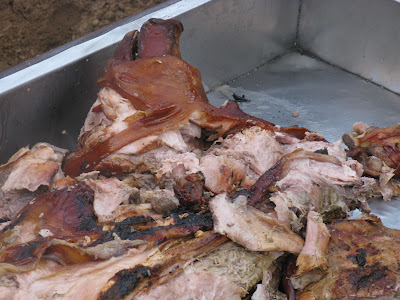 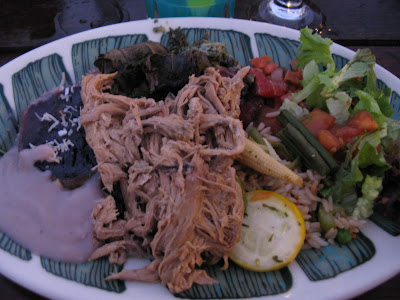 Another favorite dish, is loco moco. This dish was a traditional breakfast served to plantation workers before sending them out to spend the day working hard on the sugar cane. Basically, it's a hamburger patty served over a bed of rice, and then topped with brown gravy and a fried egg (often onions too). So good, and so Hawaiian that we had to have several different versions so we could make a good comparison. Our favorite version was at the Honolua Store (first photo), but best gravy award went to Uncle Bill's, the food truck where we had breakfast in Hana. Apparently, Uncle Bill is an 82 year old Hawaiian who makes the gravy from scratch. He clearly knows what he's doing. 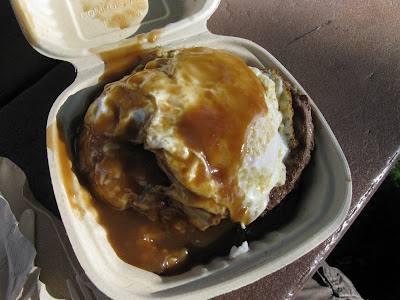 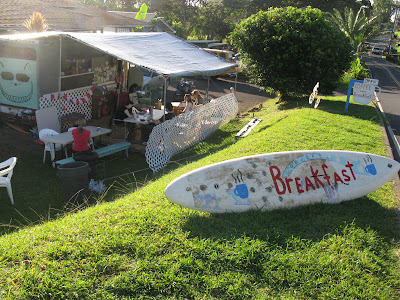 In the same spirit as the loco moco is the mixed plate, also referred to as a plate lunch. The story goes that plantation workers who had come to Hawaii from all over the world (Asia in particular), would break for lunch, and share what each had brought. The typical plate lunch comes with 2 scoops of white rice, 1 scoop of macaroni salad, and then some kind of meat. Our favorite restaurant in Maui was called the Aloha Mixed Plate and did this better than anyone. D's favorite was the version with kalua pig, and lau lau (another Hawaiian classic where pork is slowly cooked inside ti leaves). This was the only restaurant we returned to for a second visit! 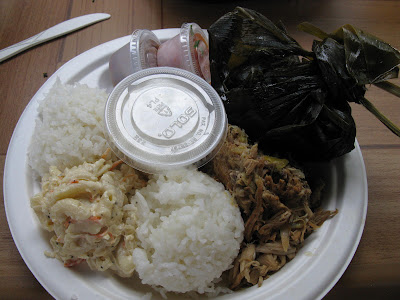 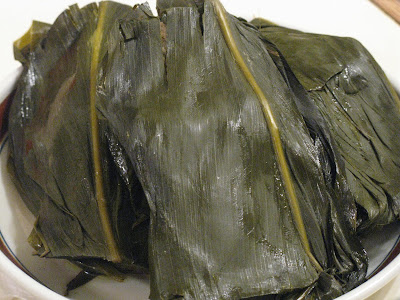 A lot of people are surprised when they learn that spam is a huge part of Hawaiian cuisine. A throw back to the war years, when getting meat to the islands was a challenge, the military shipped in a lot of spam, and everyone started incorporating it into their traditions. A classic snack food in Hawaii is spam musubi. I'll admit it, I find spam a little sponge-y, never high on my list, but in spite of myself I really liked this! Rice, a piece of fried spam, wrapped in some nori, this sells for about $1.50 just about everywhere as a quick grab and go snack. 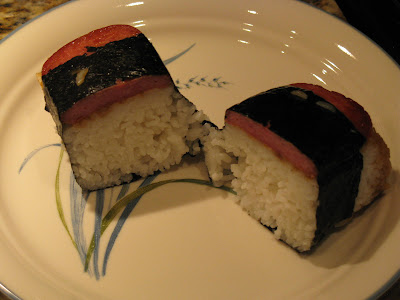 Now, we are on a tropical island, with lots of beach time, so ice cream would be refreshing, but in Hawaii it's shave ice. Bad shave ice is essentially a snow cone, where syrups have been poured over crushed ice. GOOD shave ice is made when syrups are poured over ice that has been shaved from a solid block of ice. Is this difference important? YES! It's what makes shave ice so good! In fact, we would assess each place before ordering to be sure they were shaving from a large solid chunk of ice, as opposed to using these crushing machines they would pour ice cubes into. Flavors of syrup are available in a wide range, but we always prefer the tropical flavors, and perfection is ordering it over a scoop of macadamia nut ice cream. Yum! 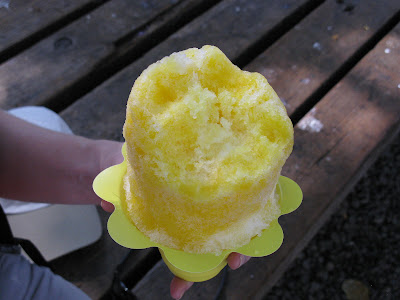 The fruits in Hawaii are as plentiful and fresh as you can imagine. Some faves that I just can't get here are the rambutan, and a fresh coconut with a straw. I'll admit I also like seeing the dudes hack away at my coconut to get the water for me, always entertaining. The pineapple, mango and star fruits are also delicious, and plentiful. We also had some tree-ripened tangerines from the tree in front of our place in Hana, perfection. 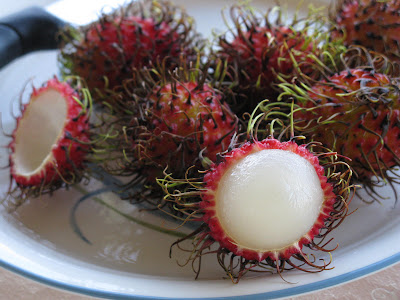 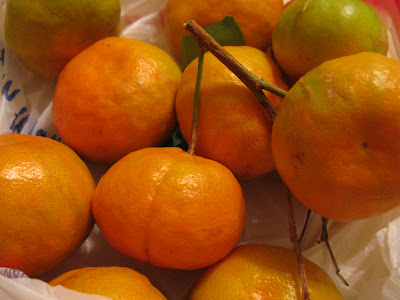 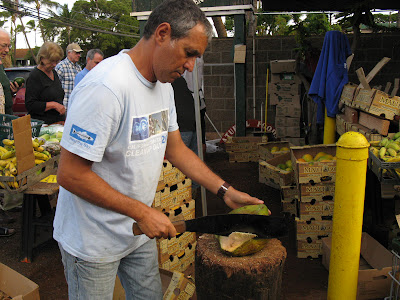 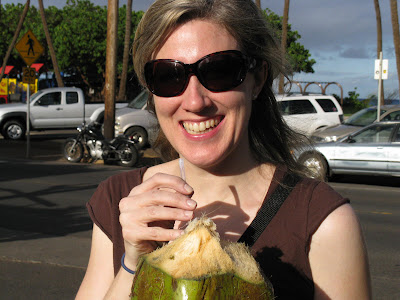 Where good fruit abounds, so do delicious smoothies. The Road to Hana was full of smoothie stands along the way. Our favorite was just beyond the O'heo Gulch, where an organic farm has their own fruit stand and smoothie bar. They'll put you to work though, as the blender is bicycle powered, and you need to pedal for your own smoothie. I had a papaya and tangelo smoothie. 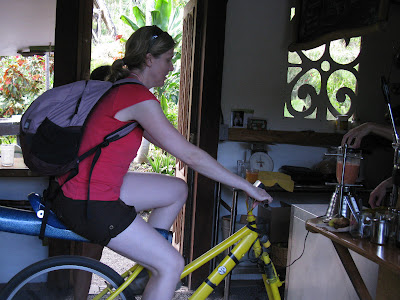 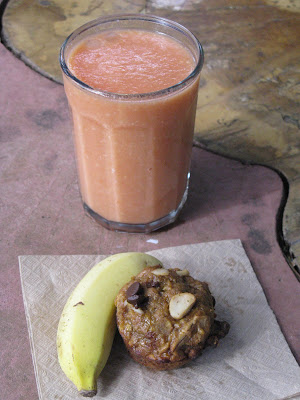 In addition to the food, the tropical drinks are always plentiful also. The classic Mai Tai, Lava Flow and Blue Hawaii are all hard to resist while you're sitting there watching a sunset. 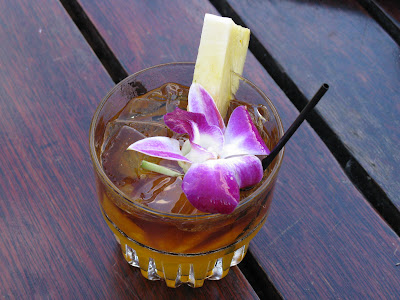 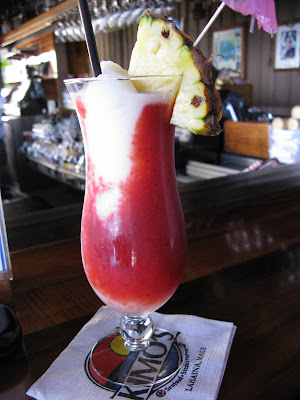 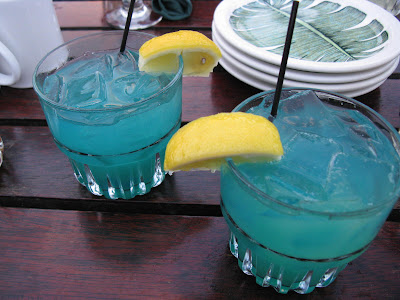 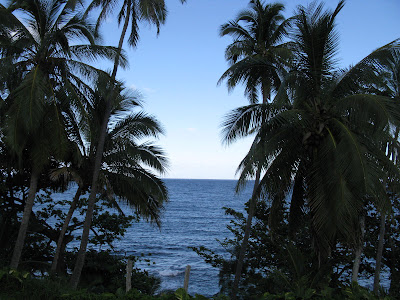 Aloha! I'm back from Maui and full of aloha. My trip was everything I had hoped it would be, plus more. Relaxing, refreshing and just what I needed.

There's something about Hawaii that you can't help but let affect you. Yes, of course it's beautiful. The palm trees, sunsets, rainbows and waterfalls really are as plentiful as you read about. For me though, it's the aloha spirit that is really what I go there for. The aloha spirit is what refreshes me and just makes me so, well . . . happy. More than just a greeting that you hear, aloha is a spirit that is deeply embedded in the Hawaiian culture. It's a way of treating other people, living in a community and valuing what is important. It's what I try to bring home with me and hold onto every day.

We spent a week on West Maui, and then our last three nights in the small town of Hana. It was an incredible experience and I'll be sharing lots of highlights this week.
Posted by Kristin at 1:31 PM No comments: