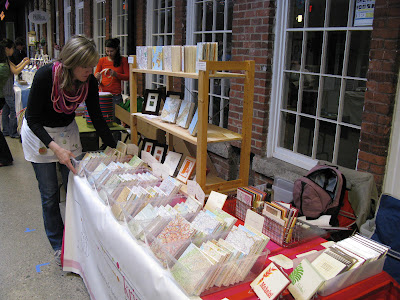 Sunday I kicked off craft show season with Craftopia, a first time show in Pawtucket, RI. I have been to that space before for Open Studios and the Winter Farmer's Market and really love it. I have a soft spot for old mill buildings, and love how there was still a sign on the door where I walked in that said "Weave Shed 2."

As a first time show, I wasn't sure what to expect, but the day was a success. It was bustling the whole day, I sold a lot of journals, and got a big pile sewn too. It was also great to see a lot of artists I hadn't seen in a while, and also to meet some whose work I've gotten to know through selling it at Craftland.

This was only the second table show that I've ever done, so I'm still working on my display. I liked this solution of having some on the shelf for display, but then bins organized geographically for people to flip through. I think it made a big difference. The clear plastic looks a bit low budget, so I'm planning on covering them with fabric or paper before Twist. I also sold a lot more of the map collage note cards (similar to this one) that are relatively new for me. I had only a few last year, I think having more of them made an impact. 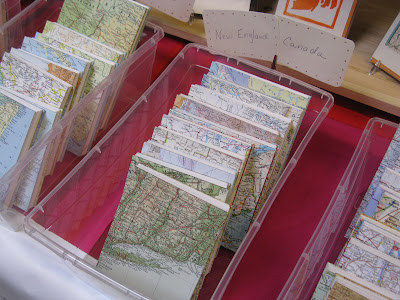 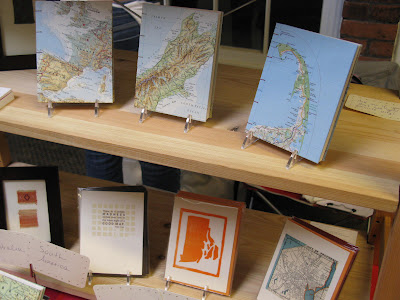 Surprise of the day was not selling the Pawtucket journal I had. Huh...

(A totally random aside, while getting ready for the show, I found my favorite sock that I lost back in October. Where was it? Stuck to D's "My girlfriend makes stuff" shirt (this one) that he hasn't worn since October. A shirt he got a lot of compliments on!)
Posted by Kristin at 2:26 PM