When we started telling people we were going to Ecuador, the most common question was "Why Ecuador?" There were a lot of reasons, our affection for Latin culture, our interest in Andean culture, for D it was the food and for me it was the rich textile history of this part of the world. In addition to the overwhelming Otavalo market (its own post later this week), there was also the tradition of backstrap weaving. I really wanted to see this in action. 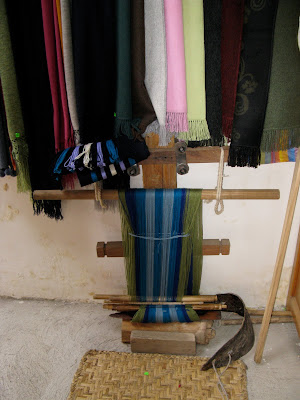 Our visit to Otavalo included a stop in the town Peguche, a town historically known for its backstrap weaving. We stopped into the homes and studios of two weavers who explained the process and gave us a demonstration. Seeing this in person was a highlight of the trip for me. What's interesting to me about this technique is that the weaver is part of the loom. The loom is basically a collection of sticks, poles and strings. One pole is tied to a post or tree and the other goes around the back of the weaver. This loom is also portable and can easily be moved around. These looms can produce a textile with four selvedges. There's no need to cut the warp because the loom can be removed from the fabric, not the other way around. 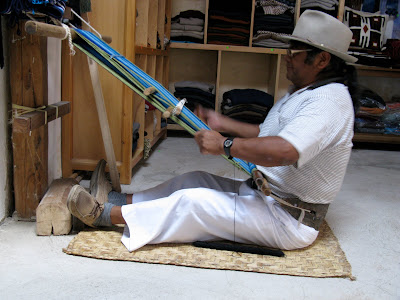 In Ecuador, this type of weaving is done exclusively by men. I got a kick out of asking both weavers if this was ever done by women and having them look at me confused and then explain that women couldn't manage this, it takes too much strength. While it definitely does require a lot more physical work than other weaving, it still made me laugh. Especially considering women in Guatemala do this type of weaving all the time. What I found amazing while watching them weave was how much time it takes between picks. In order to make the shed, put the pick in, beat it into the fabric, it requires them to move their body to adjust the tension for whichever step their doing. This is a time consuming process, which one of the weavers told me is why he prefers it, because it's harder. I was fascinated watching this simple machine, operating by moving different sticks around, weaving fabric. 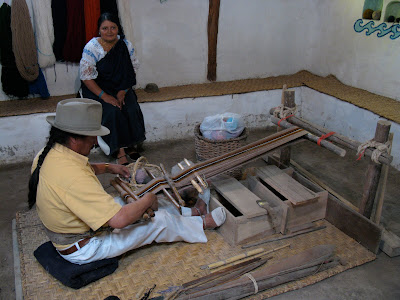 They usually do a plain weave structure, sometimes adding supplementary warp or weft for embellishment. Different areas of Ecuador sometimes do this with an ikat warp, because backstrap weaving wasn't labor intensive enough!

I bought two pieces of fabric from one of the weavers. One is a piece that Otavaleños wear as a belt, and the other, what women wrap around their long braids. I also bought a shuttle that had belonged to one of the weavers that I can use on my own loom, what they refer to as European looms. The shuttle needs some sanding down, and a piece put in to hold the bobbin, but I couldn't resist having a handmade shuttle, and one used by a master weaver in Ecuador. 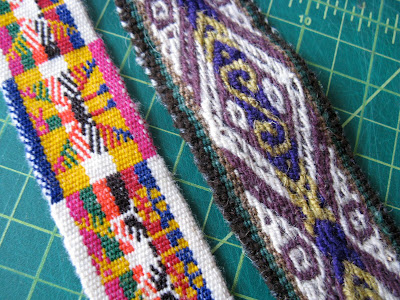 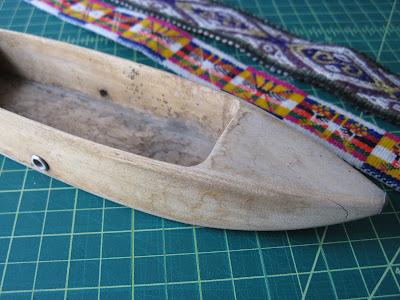