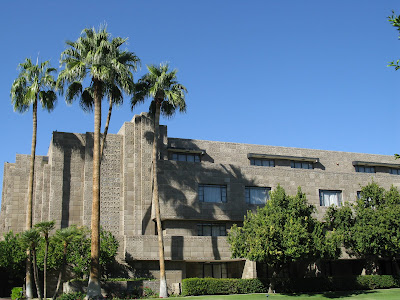 On last week's trip to Arizona, I had the pleasure of staying at an amazing resort, the Arizona Biltmore. From its Web site, "Built as one of Phoenix’s first resorts in 1929, the Arizona Biltmore was constructed in grand form by brothers Albert, Charles and Warren McArthur. Frank Lloyd Wright served as the consulting architect, and the Arizona Biltmore remains one of the only existing hotels in the world to benefit from his influence." The hotel is rumored to have opened just minutes before the stock market crash in 1929 and gives you the sense that you're stepping back in time and should be ordering martinis. 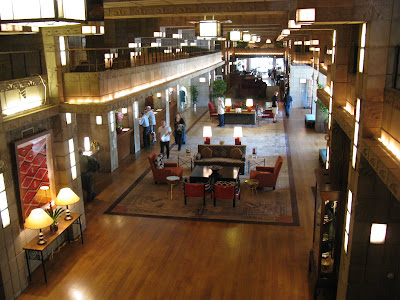 Wright was only a consultant on this project, but his influence is everywhere. Upon walking in, one of the first things you see if a stained glass that he designed which was executed by Nino Greco. 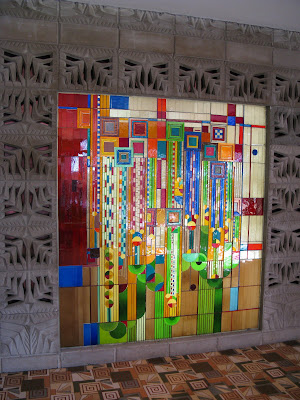 The low ceilings give the resort an intimacy that most hotels lack. The center courtyard with its perfect view of a mountain, makes the resort feel as if it was truly designed for the space it's in. It doesn't seem to dominate over the land, but instead shows off its beauty. 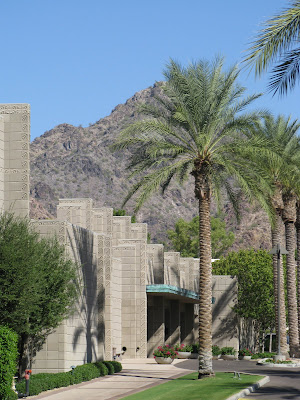 As a textile designer, I have a great appreciation for surface design and repeating patterns in all their applications. This hotel proved to be one of the best examples of great surface design. The hotel uses one tile pattern throughout all the buildings in the resort. The tile was designed by Emry Kopta, a southwest sculptor chosen for his ability to capture the spirit of the southwest. It was inspired by the pattern on a palm tree, at the point where the fronds have been cut off the tree. While interesting on its own, what I loved was how this one tile was used throughout the whole building in different ways, creating many different patterns. In some uses, it almost seems like it's a different tile. I couldn't help but think about the hours that were spent designing each facade using this one tile. The attention to detail in this building is something rarely seen today, where hotels all seem so generic. 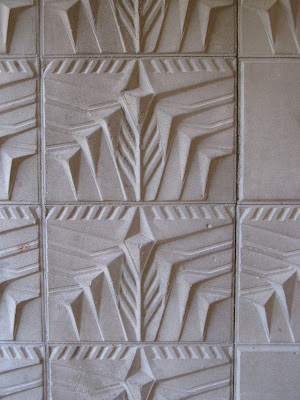 Another detailed used throughout the hotel were the Biltmore Sprites, angular sculptures designed by Wright and seen often as a pair, but sometimes standing alone. I got home and did a little searching to find out their story which you can read here. (It's interesting, and involves prohibition!) It was a very relaxing trip. 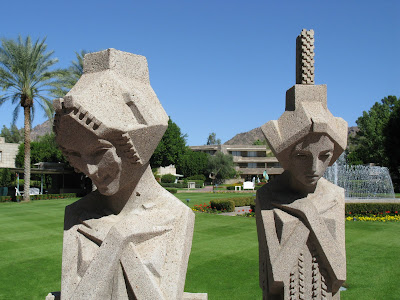