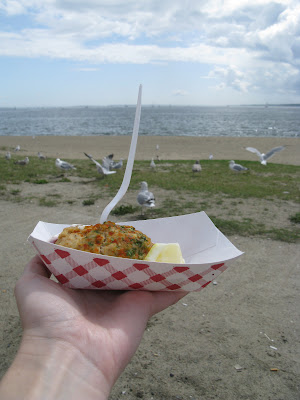 This December will mark my 11th year being a Rhode Islander. While that is staggeringly difficult for me to believe, what's even more difficult to believe is the fact that until yesterday, I'd never had a quahog. I came home wondering what exactly a quahog was. I ordered a quahog, but then was delivered a stuffie. So are these two words interchangeable? If not, what's the difference?
A little digging and I learned that quahog is a large chowder clam, and technically can also be used to describe littlenecks and cherrystones; but that Rhode Islanders do use the term quahog and stuffie interchangeably. When seen on a menu, it's safe to assume that the quahog will be served as a stuffie, which means the freshly shucked clam is chopped up or ground and mixed into a stuffing, which typically includes bread crumbs, Tabasco sauce, onions, celery, pepper and often chourico. It's then stuffed back into the clamshell and baked. I had my version at Iggy's, along with another Rhode Island classic, a doughboy (basically fried dough with powdered sugar).
I also learned that the quahog is the official shellfish of the Ocean State (who knew we had one), and that Rhode Island supplies 1/4 of the country's supply of quahogs, not bad for the smallest state!
I'm not a huge seafood eater, which I never thought odd until I moved to Rhode Island, but since moving up here I give things a try and am often surprised to discover I like a lot of it. The quahog was surprisingly tasty, but then again, what doesn't taste good when eaten on the coast with your feet in the sand?? Only wished I had a beer to wash it down, a 'Gansett perhaps?
Posted by Kristin at 1:11 PM