OK, I can't resist it, I have to do a Michael Jackson posting today. I know he got really weird, crazy . . . and white in recent years, but he still holds a prime spot in a lot of my good childhood memories. I just have to share today.

Michael Jackson's Thriller was the first album that I remember liking and wanting. I was probably 6 or 7 when it came out, and just LOVED Billie Jean. I remember my dad buying the tape and always wanting to put it on and dance around the house. When the Jacksons were going to be touring in 1984, I wanted to go sooooo bad. It was impossible to get tickets, but my dad was able to score some the day of the concert! I remember him calling home when I got home from school and telling me to be ready when he got home from work. For some reason, "getting ready" involved 8 year old me thinking it was a good idea to shave my legs. (???) 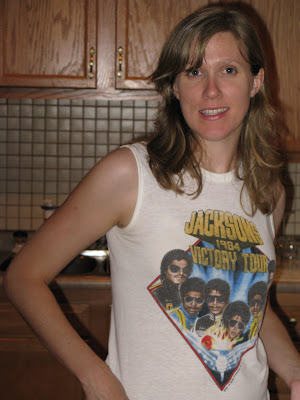 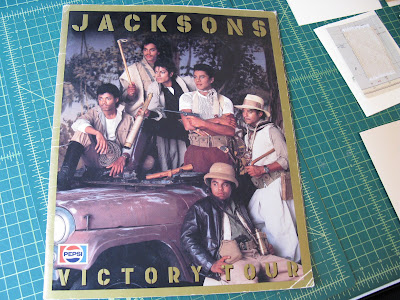 My other awesome Michael Jackson memory is the Grammy Awards back in 1984. I was dying to see him perform. I remember I needed to be in my pajamas and all ready when it started, and I was allowed to stay up a half hour past my bedtime. Of course, this was the pinacle of Michael's career. He was the finale, and everything he was up for were the final awards given out. Bedtime came long before before any good footage and I went to bed bummed. Remember, this was pre-youtube, even pre-VCR. Missing it meant missing it!

When it was time for his performance I was fast asleep (as was my mom), my dad came up to my room, scooped me out of bed, and brought me down to watch him perform Billie Jean. Aaahh, it was SO good! Plus, I was the only person in my class who had seen it! (Note to parents: waking kids up in the middle of the night might mean they'll be tired and crabby the next day . . . but they'll still be psyched about it 25 years later.)

I also remember trying to moonwalk across our kitchen floor, sleeping at a friend's house to watch the Thriller video (we didn't have cable) and then being scared from it. To this day, I never make a party playlist without a couple of Michael Jackson songs and I always requst some Jackson 5 at any wedding I go to (and usually specify to use the version of ABC with the "shake it, shake it, baby" part).
Posted by Kristin at 10:02 AM