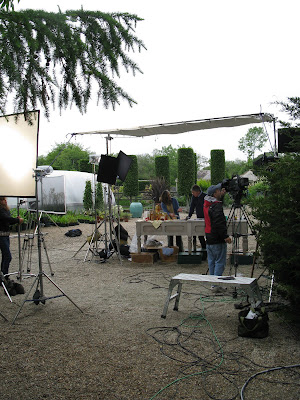 At long last, I can tell you about my paper making and peach project that I've been keeping under wraps.

Yesterday I was a special guest on the TV show Cultivating Life, a show about outdoor living. Each episode has a different theme and is made up of a variety of segments, such as food, garden, crafts, and building. I was the craft guest for the vegetable show! I taught the show's host, Sean Conway, how to make paper, and make it vegetable related by putting a lot of veggie seeds in the paper, and flowers we had harvested from his garden. It's filmed outside, in Tiverton, RI.

This was a whole lot of fun. I've never done anything of the sort before, and it was cool to get a behind the scenes look at how a television show is filmed. I also was assured that it looked good, went smoothly, and my hair didn't start to look like a frizzy mess despite the mist and drizzle. (I'm a leo, I can't help it, I'm vain about my hair looking good.)

My episode was vegetable, and my good friend Deborah's show was peaches, where she demonstrated stenciling. I helped her design and make some of the products which were displayed during her demostration. 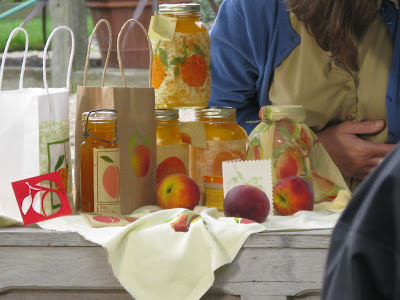 Of course, I totally forgot to give someone a camera while I was up there! Blast! I did, however, sneak a few shots of Deborah while she was up there and of the peach display.

I'll be sure to let you all know when it airs. They film all summer, so I'm not sure if it'll air in the fall, or next spring, but I'll be sure to spread the word when I find out. I guess it's always possible I could end up on the cutting room floor, but I hope not!